We have for sale used Clay Paky Alphabeam 1500 Automated lighting fixtures, these are al in good condition and the price is per fixture. Includes single flightcase.
Read More 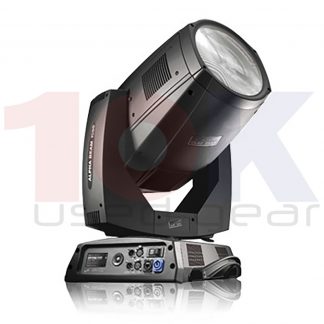 Clay Paky Alpha Beam 1500 is the most powerful luminaire belonging to the special category of fully automated ACL fixtures.

Main features and specification for Clay Paky Alpha Beam 1500: Featuring the new Fast-Fit 1500 W lamp, the Clay Paky Alpha Beam 1500 can also become as a spotlight for long distance focused projections and perform as a good narrow-angle washlight. By motorizing the narrow beam of concentrated ACL light, Clay Paky has invented a new category of spotlight, the “Beam Moving Light”. Alpha Beam 1500 is the top model in this category, in power, abundance of devices and spectacularity of light effects. The Alpha Beam 1500 is extremely fast: in a moment, it points at the stage, then at the audience, then up into the sky at open-air events. It can be an exciting blinder or striking dynamic colour-changing sky tracker. For this reason, the Alpha Beam 1500 has already become the star of world famous events, such as the inauguration ceremonies of large shows, international sporting events, and concerts by famous artists. The Alpha Beam 1500 produces a highly visible, dazzling, solid bar of light, whose diameter may be modified by adjusting the iris. Its shape may be changed thanks to a vast set of devices, i.e. several effects can be created in mid-air. Thanks to the special optical unit invented by Clay Paky, the Alpha Beam 1500 concentrates light into a beam that is very much brighter than those of any other spotlights with the same power. Its beam stands out against any background. It is a perfect blade of light in multimedia shows that cuts through - with breathtaking effects - the brightness of washlights or the LED video systems that fill the backdrops of stages. Even though the beam is generated by a light source of only 1500 watts, it is bright for hundreds of metres: distances that until now could only be reached by search lights with powers of several thousand watts. The Alpha Beam 1500 has an innovative patented focusing system that allows extremely bright effects to be projected. Focusing is achieved by moving the entire effects section and not just a single lens. This original solution is the fruit of Clay Paky research. The Alpha Beam 1500 is the only beam moving light that can also become a washlight or a spotlight. Its colour-engine (CMY mixing, special colour wheel and CTO) and gradual frost diffusion support, make it an excellent narrow-angle washlight, ideal at large venues, arenas and stadia. Furthermore the wide range of visual effect devices means the Alpha Beam 1500 can also be used as a spotlight, not just for effects in mid-air, but also for clear gobo projections, which become beautiful decorative images when the two rotating prisms are used (similar to those of a powerful moon-flower effect). The Alpha Beam 1500 should not be seen as a niche light, devoted to special effects, but as a versatile tool to be chosen for its spectacular beams and used during the same show in many different ways.
Did not find what you need? Send us an enquiry _______________________________

Be the first to review “Clay Paky Alphabeam 1500” Cancel reply