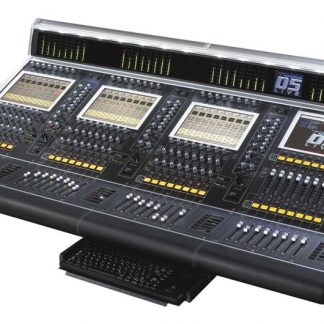 The Digico D5 Live is the digital mixing system that changed the professional audio industry’s perceptions of what a digital console can do, and how it should do it.

The Digico D5 Live software gives you unparalleled flexibility in configuring your console precisely to suit the show. The control surface consists of three input sections, each with their own dedicated touch screen, 8 faders and 6 individually selectable bank switches allowing multiple user operation. The master section has its own touch screen with 16 Faders plus master and two lots of selectable bank switches for instant access to Groups, Auxes, Matrix and Control Groups.

The Engine itself is integral to the console worksurface, its internal busses can be set up as mono or stereo auxiliaries and mono or stereo or surround busses (the console is fully 5.1-ready as well as for LCR(S), with three joystick surround sound panners for instant sound placement). And you can instantly select a basic set-up for either front-of-house or monitor mixing. With both types of console sharing the same fibre optic loop, automatic Gain Tracking™ allows either console operator to alter input gain without affecting the mix on either console. All D5 systems includes the digital effects card which allows you to run up to six digital effects per channel simultaneously, including dedicated reverb algorithms, flanging, phasing, double tracking, vocoder, delays, dynamics, compression and equalisation for up to 7.1 surround sound outputs and up to twelve 28 band graphic equalisers. It also includes the Insertable Processing Channels which provide a total of 32 IPCs, each complete with 6 bands of fully parametric equalisation, a fully featured compressor / limiter and digital delay of up to 512 milliseconds. In a complete house-and-monitor D5 Live system, Gain Tracking™, a world first for DiGiCo, allows either console operator to change any input gain without affecting the sound balance on either console - Gain Tracking™ is selectable on each channel independently on each console.

The D5 Live has four MADI connections and two Optical (the second optical allowing for a redundant loop) This allows a combination of up to four of any DiGiCo I/O Racks to be used with the console. Thus, giving the ability to connect up to 224 inputs and 224 Outputs.

Be the first to review “DiGiCo D5 Live” Cancel reply 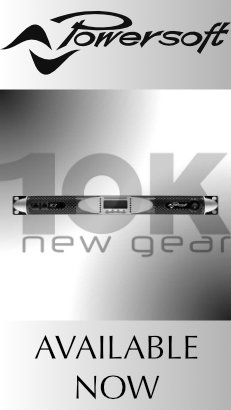