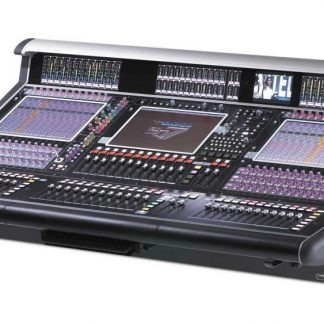 Main features and specification for Digico SD7: The Digico SD7 Live Digital Console delivers eight times the power then the standard D5 Live. Digico SD7 - Scratching the surface A combination of technologies have been seamlessly integrated into the SD7's worksurface to meet the everyday needs of any touring engineer. DigiCo managed to pack them into three user-friendly interactive 15-inch high-resolution touch screens, each of which accommodates a bank of 12 faders,  to provide the user with the perfect platform – everything is just 'where it should be'. To make navigation even easier, they have added high-definition interactive meter bridges and multicoloured knobs and switches; and for further functionality and flexibility, 16 assignable faders (one bank of 12, one bank of four) sit neatly below the master screen in the centre of the console, taking the Digici SD7 fader tally to a sizeable 52. To increase the fader count further for multi-engineer applications and shows, an EX-007 Fader Expansion unit is available. Two EX-007s can be connected via a simple Cat5e connector for remote control or simply to increase your fader count to 100. What's under the hood? It boasts a massive 256 processing paths at 48kHz/96kHz (or 128 at 192kHz). Standard channel processing, whether inputs or outputs, includes Channel Delay, DiGiTube, Single and Multi Channel Presets, Dual insert points, Hi- and Lo-pass filters @ 24dB/octave, four-band parametric EQ (eight on outputs) with band curve selection and Dynamic EQ on each band, Dual insert points, DiGiCo's DYN 1 (Compressor, De-esser or Multi Channel Compressor) and DYN 2 (Gate, Compressor or Ducker). The master section incorporates 32 gangable 32-band graphic EQs, 48 stereo effects, and 36 control groups (VCAs); and using snapshots, engineers can now switch between complete configurations in any live environment easier than ever before, be it at rehearsals, during system setup, or even at a show. In addition, they have included 128 busses, all of which are assignable as mono/stereo groups or auxiliary busses; and in addition to these busses, for further configurability, we've provided a 32 x 32 output matrix , dual solo busses, and a Master buss. Essentially, users have the equivalent of 160 busses of DSP at their disposal. Unlike all other digital console manufacturers, you don't lose Aux or Group Busses when using the Matrix as they are in addition, including the Master buss. I/O DiGiCo SD7 local I/O includes 12 analogue inputs, 12 analogue outputs and 12 AES I/O (mono); and when coupled with a second engine, with four redundant MADI ports per engine, and one Optocore loop with the ability for an option for a second to be fitted. This amounts to a monumental 1392 I/O connections on a single optic loop with one worksurface. In addition, there is an optional DiGiCo SoundGrid module which can be fitted to both engines for full redundancy when linked to two external PC servers such as SoundGrids or DiGiGrids. This provides the user with instant access to 32 fully integrated low-latency Waves stereo Multi Racks, each with the ability to have up to eight plugins per rack. That's 128 I/O - and as you'd expect from DiGiCo, this is all additional I/O. Did not find what you need? Send us an enquiry _______________________________

Be the first to review “DiGiCo SD7 Surface” Cancel reply