We have for sale used L-Acoustics K1 Lasermount, these are all in perfect condition and the price is per piece.
Read More 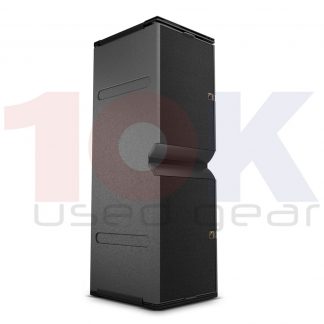 The K1 enclosure is the full-range element of a large format WST line source with variable curvature. The K1 features two 15” speakers mounted in a bass-reflex enclosure, four 6.5” high-efficiency direct radiating speakers, and three 3” diaphragm compression drivers coupled to individual DOSC waveguides. The transducers are implemented in a K-shape configuration. The K1 enclosure is based on a 3-way active design with 2 LF sections, 1 MF section and 1 HF section, each one at the nominal impedance of 8 ohms. The K1 enclosure is made of first grade Baltic birch plywood to ensure maximum acoustical and mechanical integrity. A four-point rigging system is integrated into the cabinet. The K1 enclosure operates over the nominal frequency range of 35 Hz to 20 kHz. The frequency response of the system can be extended down to either 30 Hz or 25 Hz with the addition of the dedicated KI-SB extension, the SB28 or the KS28 subwoofer, respectively. The K1 generates a symmetric horizontal coverage of 90°. The rigging system allows vertically assembling K1 enclosures with various inter-element angles up to 5°, constituting a line array with variable curvature. The combination of the coplanar symmetry and the DOSC waveguide in the HF region ensure a perfect acoustic coupling between the elements of an array. The WST (Wavefront Sculpture Technology) criteria are fulfilled, so that such an array can be qualified as a true line source. Any WST line source provides a smooth tonal response and a coverage that is free of secondary lobes over the entire frequency range. The K1 system is driven by the LA8 or the LA12X amplified controller which ensure active system linearization, intelligent transducer protection, and optimization of the loudspeaker system in its different operating modes. The acoustic performances of the system will depend upon the used preset and the chosen physical configuration. Did not find what you need? Send us an inquiry

Be the first to review “L-Acoustics K1 Lasermount” Cancel reply