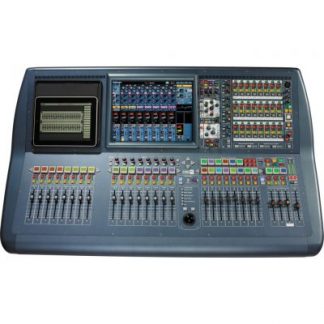 Midas PRO2 / Midas PRO2C is a live audio system providing a complete solution for any audio mixing and signal distribution application in a live sound.

Main features and specification for Midas PRO2 / Midas PRO2C: Please remember, the PRO2 is not just a console, it is a LIVE PERFORMANCE SYSTEM! Additional I/O Box Options Accessories System components (standard supply) Midas PRO2 Live Audio System can be supplied in either a touring package or install package. In both packages the following is supplied as standard: Touring package Install package Offline editor Midas PRO2 is a mid-size mixing console and comes complete with a stage IO box and flight case. The console is designed to work for long periods, not just indoors but under harsh sunlight or near freezing conditions. The console forms the core of the PRO2 Live Audio System, whose network carries both proprietary control data and open architecture AES50 digital audio, and uses readily available standard cabling and connectors. The PRO2 uses the reliable Linux operating system. The PRO2 Live Audio System incorporates dual redundancy on mains power, facilitated by two mains inlets. Additional AES50-compatible sound processing products can be connected to the PRO2 to form extended distribution and mixing console “system”. Midas PRO2 Control Centre, which forms an integral part of the PRO2 Live Audio System, was conceived by Midas to offer audio professionals high-performance audio equipment, designed to provide no-compromise sonic quality with a feature set that offers all essential facilities and functions. It represents the very best of British design and engineering combined with contemporary, efficient manufacturing methods, and will give you many years of reliable service. Midas PRO2 is also available in minimum-footprint compact form Midas PR02C. Midas PRO2C is essentially the same mixer, the only difference being the physical size of the user interface. The PRO2C features all of the facilities of its larger sibling, yet this 64 channel mixer is no larger than many 24 channel analogue consoles. Although the PRO2 is designed for the traditional touring live sound environment, it is also ideal for medium-sized theatre, small house of worship installations and broadcast. So, being a truly multi-function console in the Midas tradition, the PRO2 is suitable for many applications, such as: Did not find what you need? Send us an enquiry _______________________________