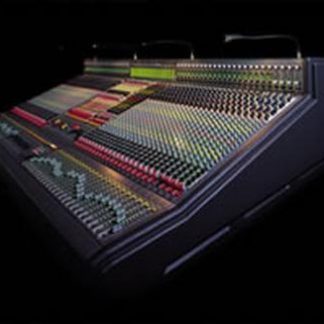 The XL4 is the pinnacle in the current range of Midas consoles. Designed around the classic high quality associated with analogue circuitry which was proven with the XL3 Live Performance and Theatre console. Midas XL4 Broadcast Console - The requirements associated with the broadcast environment was designed into the original XL4 specification. These include, moving faders on all 48 Inputs and 12 VCA’s including remote machine starts, instant access to AFL/PFL, Snapshot automation to include audio follow video, direct outputs on each input, 16 Mic/Line level returns with VCA routing for total control over effects and ambient microphones as well as full communications module. 48 Mic Inputs. The Midas XL4 features a new mic amplifier which further improves on the XL3 design giving increased gain range and lower distortion whilst retaining the XL3's constant HF bandwidth topology which assures excellent amplifiers stability, RF rejection and noise performance at all gains. Direct Outputs. Every input module is fitted with a direct output as standard with its own level control and front panel switching which selects the source from post fader, pre fader or pre insert and equaliser. 16 audio sub groups. The 16 main audio groups can be assigned to any of the 8 automute groups and to VCA control from any combination of the 2 motorised grand master faders. A safe switch is again included for each group. Line inputs. A separate Hi Z line input with its own dedicated gain control is incorporated which is ideal for playback of recorded material. Equaliser. The sonic performance of the legendary XL3 equaliser is maintained including the full parametric mid's and traditional Midas bass and treble shelving responses. Inserts. Each channel has a half normalised fully balanced insert send and return point which can be switched in or out from the front panel and set as either pre or post equaliser. Input metering. These peak reading meters cover a 60dB range in 3dB steps and can be switched globally to monitor pre fader signals or pre insert and equaliser signals. Audio busses. Each channel can be routed to any combination of 42 audio busses comprising of 16 mono aux'es, 8 stereo aux'es, 16 stereo groups and 2 stereo masters. All this is switchable on the module front panel but also via the automation control. VCA and mute busses. Each channel can be controlled by any combination of the 10 motorised VCA master faders and 8 mute masters. Assignment of these busses is again switchable on the module front panel or by the automation control. Group aux inputs. An additional 16 inputs with treble and bass equalisation can be routed directly to the groups or via a pan to the masters mix and can be further controlled by assignment to any of the 10 VCA masters. Master. The stereo master module provides the main left and right console outputs plus 4 more record outputs and a mono output. Matrix. As standard the 8 matrix outputs derive their signals from the 16 audio groups, left and right masters creating a 18X8matrix. Output meters. 28 peak reading meters (each covering a 60dB range in 3dB steps) are used to monitor all the main outputs i.e. 16 groups, 8 matrix, 2 masters and 2 local outputs.

Be the first to review “Midas XL4” Cancel reply